skip to main | skip to sidebar

Reconstructing my first first interview--Interview by Sharon Wilfong from 2010 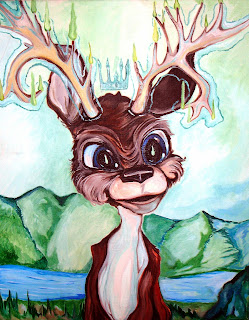 
Xavier's blog at "The Seattle P.I. Arts and Culture"

Xavier Lopez Jr. experienced the artist's life through the eyes of a child. His father, Xavier Lopez Sr. played a prominent role in the 1970's Chicano Mural Movement in Los Angeles; collaborating on murals in Pomona, CA while painting signs for a living. Growing up in a tumultuous time, with artists who were driven by collaboration, rebellion and political passion, no doubt inspired Xavier Jr. to become an artist in his own right. Years later, he graduated from the University of California, Davis, where he obtained an MFA in Fine Art with a specialization in Critical Theory and a BA in Art History. With a solid educational background, he had the opportunity to show his work in hundreds of art exhibitions. Xavier Lopez Jr. was known for his conceptual minimalist sculpture until that “fate-full” day when the 'muse' called and he answered with "a painting frenzy that lasted a crazy, cold, wintry week and ended in a collection of over twenty fevered paintings." 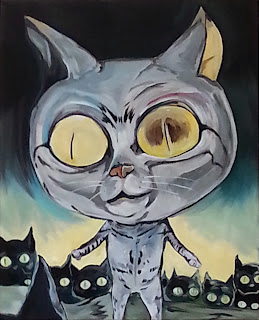 Artist as a cat and his entorage

It’s a hot August evening and we’re sitting outside on a gritty, cigarette-butt infested patio at a grungy bar in Seattle. We’re a block away from the seediest bus stop downtown, not far from Seattle’s “Skid Row.” It’s an appropriate setting to interview one of the ‘Predators of the Wild.’ For those few that don’t know, the crew of urban artists includes Xavier Lopez Jr, Ryan 'Henry' Ward, Maggie Harbaugh, Andrew Miller, 'Star-head Boy' and 'Narboo'. 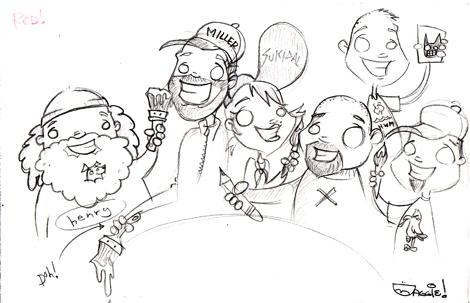 'Predators of the Wild'
Group caricature by Maggie Harbaugh

The "wild-eyed crew of artistic misfits" are rapidly becoming well-known for creating and showing art with a street-wise twist, which is at the same time accessible to everyone. I’m thrilled that Xavier Lopez Jr. has agreed to be my first interview. Though he comes across as a little shy, even nerdy at first, once I manage to get him talking, his passion for what he does ultimately outweighs any reluctance to talk about his crew and the art that they collaborate on. “I’m finally fucking doing what I’m supposed to be doing,” he exclaims with a gleam in his eye, and I wouldn’t be the first to add that –he is doing it quite well. Lopez currently has artwork in at least six different locations in group and solo exhibits. He shows paintings at the Twilight Artist Collective and has recently finished designing the cover and logo for the next issue of the underground, “Vex Magazine”, as well as "Section 8 Magazine." His Blog for the "Post Intelligencer" covers the exploding “Alternative to the Alternative,” art scene in Seattle. In August he has a featured artist position in "Dark Beauty Magazine" and a show at Gargoyles with Sara Lanzillotta. In addition to collaborations, murals, live painting events, he has "all sorts of other things that are in the pipeline!"
The Interview
S~ “What is your most dominant characteristic?”
Xavier- "Honestly, though others might disagree, I think that my most dominant characteristic is an unbridled belief in hope and the possibilities/abilities that each of us has within us. As far as we know we only get one chance to make our marks in this dimension anyway and we owe it to ourselves and to everyone else to do our best. One of my teachers at Davis once said that if we are lucky every one of us has at least one good, unique, amazing thing that we can give to the world—it’s up to us if we find that thing and share it with everyone!" 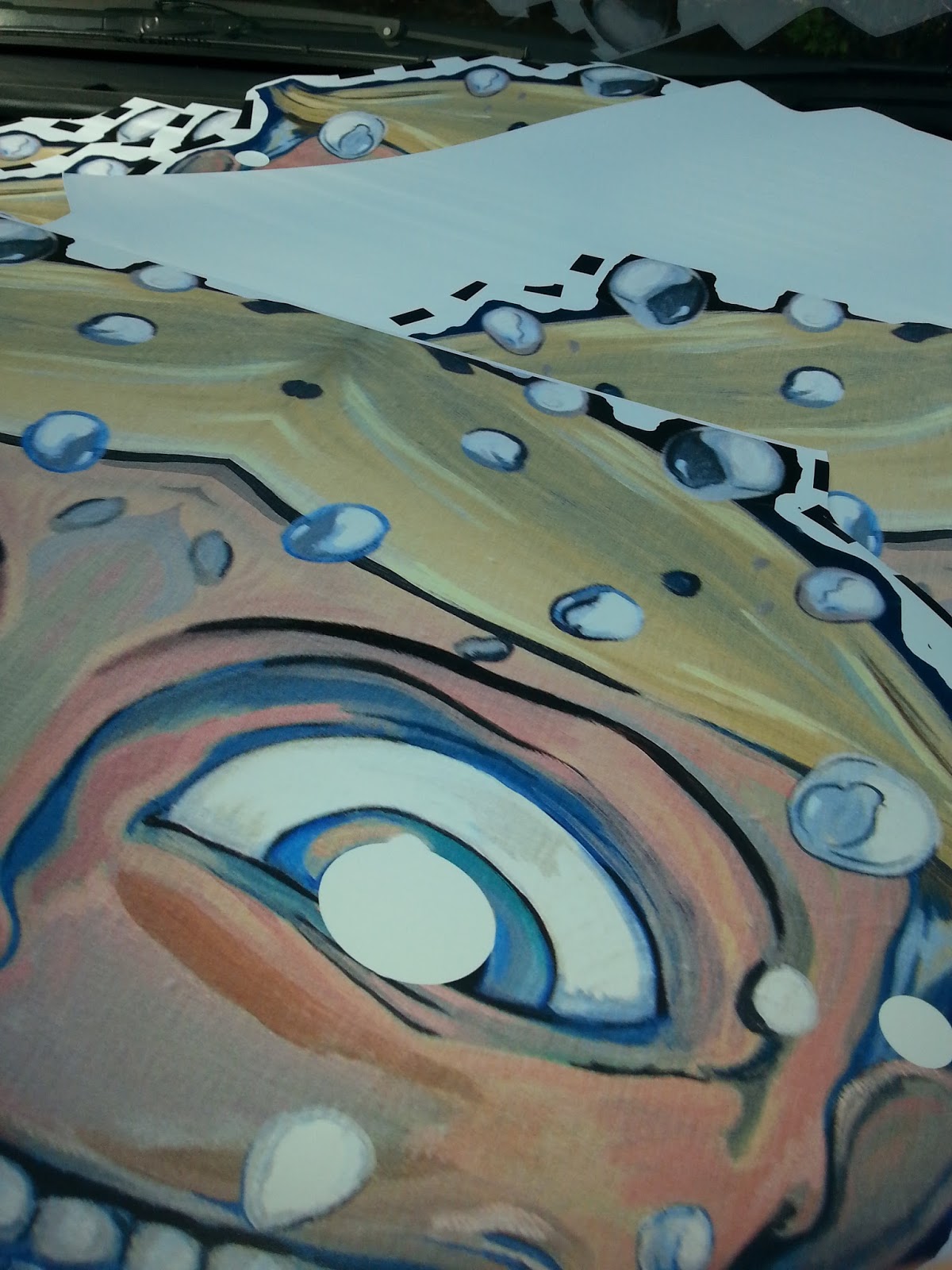 S~ “What do you hope to accomplish as an artist?”
Xavier-"I want to do everything there is to accomplish as an artist, I want to be a part of every show, get to meet and have great conversations with every other artist, do collaborations with everyone, live paint while techno music pumps all around me, wheatpaste into the wee hours of the night, make toys and posters and books and dolls and bendables, make friends and enemies, hang out with Paul McCarthy, Mike Kelley, Bruce Nauman, Jasper Johns—you name it I want to do everything! And then I want to do it again!"
S~ “What do you consider your greatest achievement to date?”
Xavier- "I don’t know about a great achievement, but I can say that one of the most amazing moments was last Saturday when I painted live on stage at the Old Rainier Brewery—it was absolutely amazing, Starheadboy, Jeremiah, Maya and Solace were right by my side and it was just an amazingly transcendent series of moments—I know SHB felt it. It was amazing—these are amazing times! Come and share them with us!"
S~ ”How does being part of the “Predators of the Wild” affect your work?”
Xavier- "The Predators of the Wild or the Merry Pranksters or whatever name we go by is my crew—they are the closest group of artists and friends and we are all going through the same things together. We share techniques, ideas and experiences. Have group shows and do live painting together—get drunk together all—I have grown so much as an artists side beside these people—they are my brothers and sister!"
S~ “Does your group have a website?” It doesn’t yet.
Xavier- "Would you like to help us make one?"
S~ "Um...Hell yeah!" 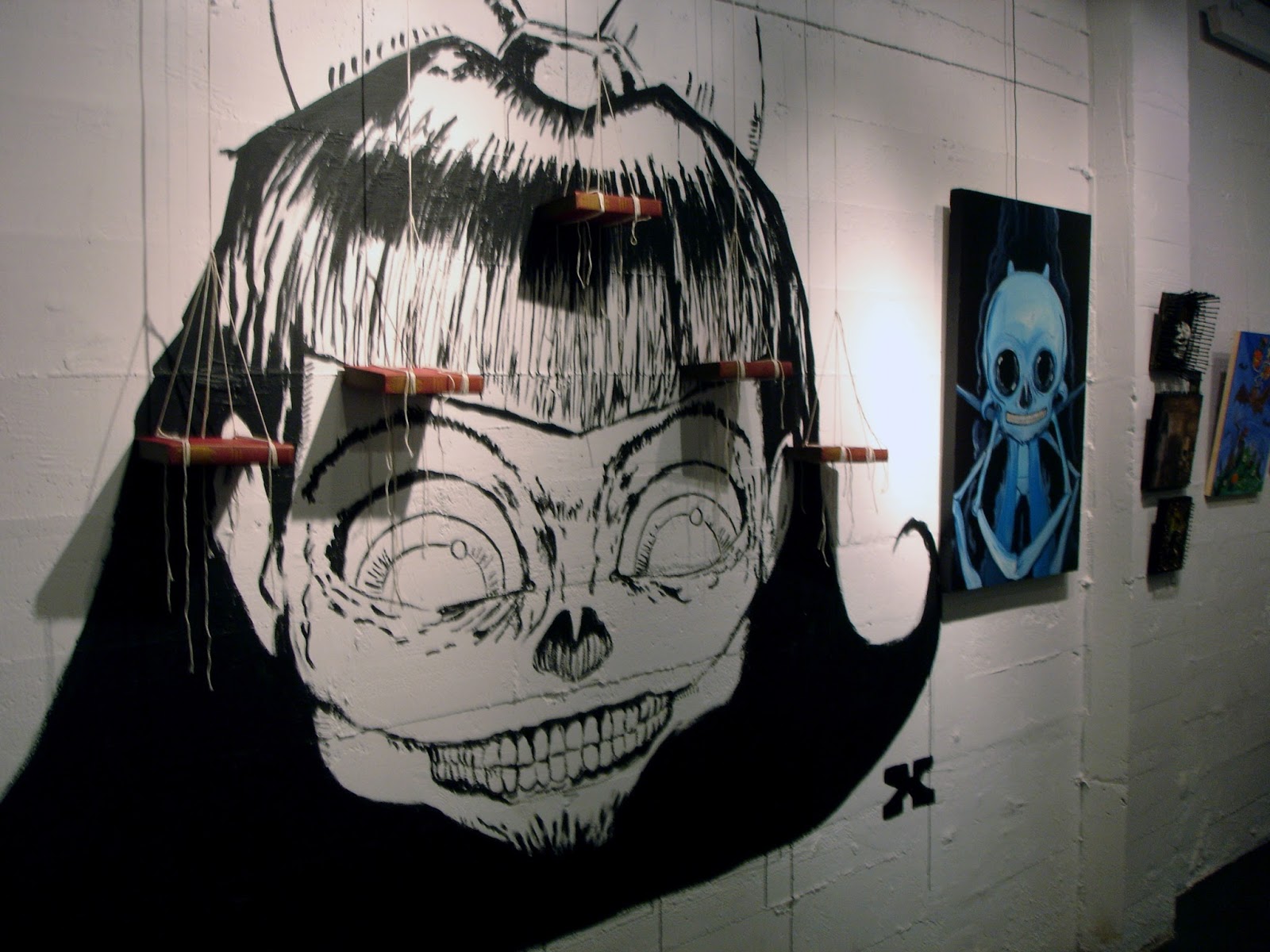 S~ “Do you prefer collaboration and painting for an audience over studio painting?”
Xavier-"They are all very different and all equally awesome. Its like different orgasms—they feel different, you may get there in different ways—but they are all awesome!"
S~ Mmmm...orgasms:) 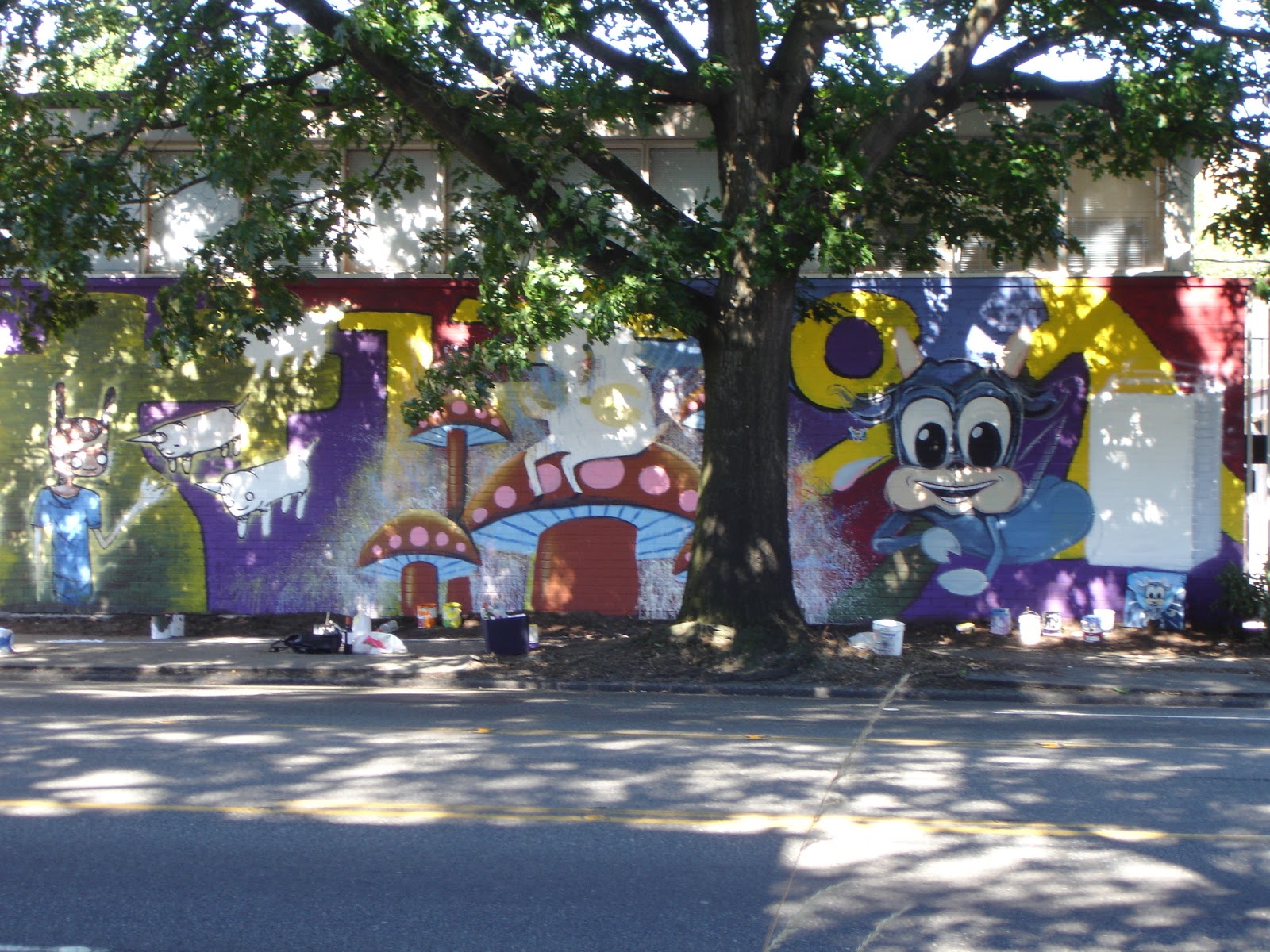 S~ “Where in Seattle’s current art scene do you picture yourself?”
Xavier-"I don’t. I just do what I do."
Posted by Xavier at 8:19 PM

Xavier on the Web